Túró Rudi is one of the most popular cottage cheese desserts of Hungary that you can buy in every supermarket. It is a small rod of cottage cheese in chocolate or cocoa mass cover. There are various legends about its name, one of them, that it was named after the grandson of Sándor Klein, professor of Technical University of Budapest in the ‘60s.

The original Túró Rudi derived from the Soviet Union and it was called “Cottage Cheese Mignon”. Túró Rudi as we know it nowadays was born in 1968 in the Dairy Company of Szabolcs. The wrapping with the little girl and with the dots was designed by two students from the University of Applied Arts of Budapest.

At the beginning of its history, Túró Rudi was not very popular mostly due to its Hungarian name that was expressed as pornographic and due to this fact, the product could not been advertised in Hungary.

After the change of the political system in 1990, the company that produced Túró Rudi was privatized. Two companies, Friesland-Campina and Danone bought the license to produce the good with the name Pöttyös Túró Rudi. The foreign name of the product “Dots”, that is the literally translation of Pöttyös, was born in this time and after 2004 the good was sold with this name in foreign land, in Poland, Romania, and in Slovakia, and then, after 2006 in Italy and in Spain where it is very popular. The Pöttyös Túró Rudi conquered the Hungarian and the foreign sweet-toothed people as well. 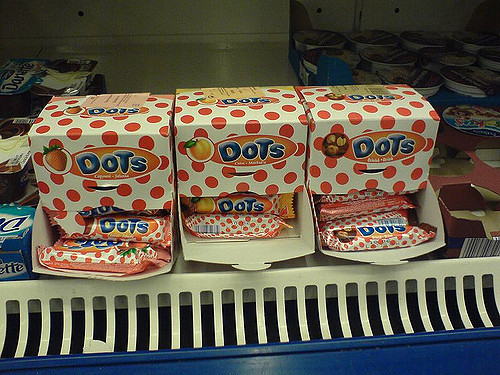 But what are the ingredients of this good? The exact recipe is certainly kept in secret, but the present ingredients are cottage cheese, cream, sugar, chocolate, or cocoa mass. The cottage cheese content of the product is 42 % while the cocoa mass content is about 36 %.

In the supermarkets you can buy various kinds of Túró Rudi and not only the Pöttyös one even if this name can be used for copyright only by Danone. For example, the famous chocolate company Milka produces Super Rudi. This product is very similar to Túró Rudi, but Milka uses its own Swiss chocolate to cover the cottage cheese slice. The biggest difference between these products is that Pöttyös uses dairy products of 50 % as cottage cheese while the other companies use cottage cheese of 100 %.

The Pöttyös Túró Rudi is a Hungaricum. When you come to Hungary, don’t lose the chance of buying one in the supermarket and taste it!

This is a text widget, which allows you to add text or HTML to your sidebar. You can use them to display text, links, images, HTML, or a combination of these. Edit them in the Widget section of the Customizer.